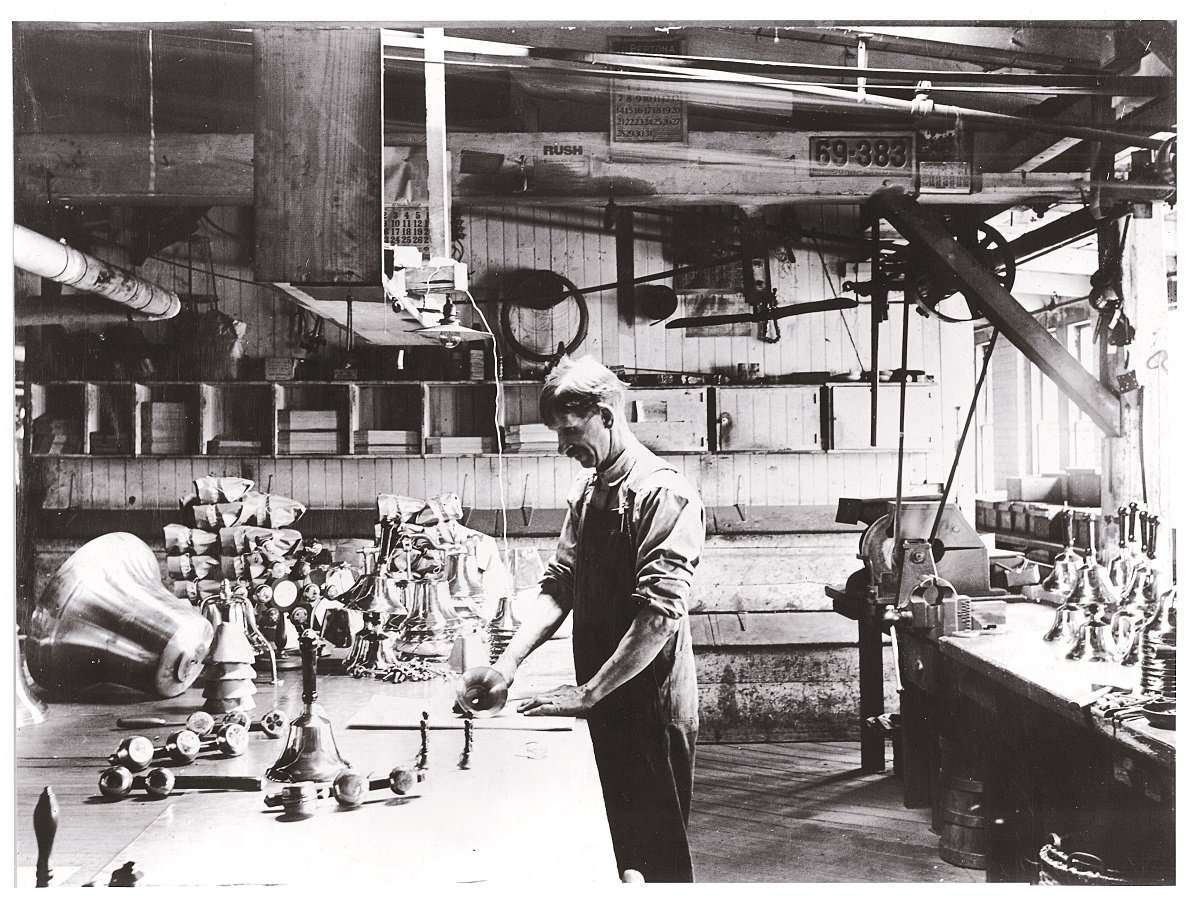 PHOTO CAPTION- The 7th Annual “Chatham History Festival” will honor The Bevin Bell Co. who are celebrating 187 years of producing a variety of bells that are shipped throughout the world. Here is a 1900 photo of the packing room of the Bevin Brothers Bell factory. Bevin Bell Co.

The Chatham Historical Society (CHS) is planning its 7th Annual “Chatham History Festival” on Sun., Oct. 6th from 12-3 pm at the CHS Museum complex on 6 Bevin Blvd., East Hampton. It will feature old time crafts, tours of the two museums, one room schoolhouse, and the “Longest Dinner Table” event.

This year the festival will honor the Bevin Bell Company that was founded in 1832 by brothers William Bevin, Chauncey Bevin, and Abner Bevin and later joined by a fourth brother Philo Bevin. During the early 1800s, Abner and William Bevin became indentured servants to William Barton, the first bell maker in what became the modern town of East Hampton. After finishing out their obligations to Barton, the two brothers set up small foundries in their backyards and began casting bells. They decided to go into business together in 1832. With the addition of brothers Chauncey and Philo, the Bevin Brothers Manufacturing Company truly became a family business. The company thrived well into the 1900s by producing a wide variety of bells for shipment all over the world. Bevin Brothers made tea bells, ice cream bells, door bells, naval bells, and it was a Bevin Bell that gave Clarence his wings in the iconic “It’s a Wonderful Life” movie.

On May 27, 2012, a lightning strike sparked a fire that destroyed the Bevin Brothers’ historic bell factory. Moving a quarter-mile away, the sixth-generation family-run concern resumed bell production in less than 6 months. Today, the company continues its operations in East Hampton, shipping out cow bells, bells for Santa trains, and thousands of bells to the Salvation Army. It is the only bell manufacturer in the U. S.

The CHS Museum Complex will be open to the public free of charge. The two museum buildings have a large display of artifacts illustrating East Hampton’s history. There is a large display of bells produced at the Bevin Bell Factory and a huge array of toys made at the Gong Bell Co. and the N. N. Hill Brass Co. There is also a beautiful display of the witch hazel industry donated by the American Distilling Co.

A new feature for the festival will be introduced by Barbara Moore called the “Longest Dinner Table.”  Friends, families, and neighbors will gather to plan a theme to honor the history of the Bevin Bell Co. or other event in the history of East Hampton. Each group will provide table settings, food & beverage, centerpiece, and any costumes or dress related to the history theme. There is no charge to participate in the activity. Be creative in celebrating the history of our town. Those wishing to participate should email or call Barbara Moore with their reservation at Barbara.moore83@gmail.com or 860-983-7140. The dinner will begin at 12 noon.

Barbara first introduced the dinner event when East Hampton celebrated its 250th Anniversary. Many towns throughout the U. S. hold similar festivities. The event will provide residents an opportunity to express ideas, and join other in an afternoon of fun, food, and music The dinner is open to everyone but limited to the first 100 reservations. The dinner will be held under a 20’ x 30’ tent provided by the Lion’s Club. The festival will be held rain or shine.

There will also be old time crafts and farm demonstrations. Lynn Krug of Gales Ferry will demonstrate her blacksmith skills.

Come and join us for a fun filled afternoon. If you have any questions call Marty Podskoch